The Web Developer With Love For Theater

Up Close and Personal with KMK 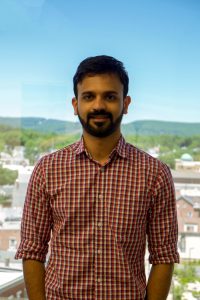 Early on in his life if you told this “computer geek” he would become a reliable software developer then you would definitely be right. That’s what Neeraj Ganvir thought 10 years ago when he took his first step at fulfilling his dream. A career path that started in India has now led him to a pharmaceutical consulting firm where he spends his days developing new applications tailored for specific clients. After working with just one other company, Neeraj was able to leave his life in India behind and start a new chapter in the United States. Today he works fulltime as a software developer in KMK’s Morristown office.

“I was always passionate about technology and that is what motivated me to pursue a career in web and software development” Neeraj said.

Starting off as a web development intern Neeraj had a lot to learn. He knew it was going to be difficult balancing school and work but he was ready for the challenges ahead. While wrapping up his first two projects he found comfort in his new work and quickly grasped new technologies and concepts as they were presented to him. Today, he works on new applications in different aspects of frontend and backend along with coming up with creative technological solutions for his client’s needs. Additionally, he spends some time researching overlooked aspects of technology from which we can benefit our tools and applications for making them more user friendly and efficient.

What have you learned and how has your journey been so far?

I can confidently say that I have significantly honed my skills by working alongside good and experienced team members and also got a chance to learn different languages, some of which were not taught to me while I was at university. A better sense of time management and meeting tight deadlines, accompanies this experience. It was more like an exposure to the real time challenges faced by a web developer. As far as the journey, I only have positive feedback; there is a lot of camaraderie that is present among the employees which creates a friendly and collaborative work environment. The challenges encountered in this workplace act as an impetus for an individual’s improvement by making him or her brainstorm and implement possible solutions to overcome the challenge.

What has been your proudest technical achievement?

Recently I was working on a task where we faced a problem we’ve never seen before. Our objective was to create an intuitive way for visualizing data; a task that has never been tackled before. After extensive research and countless trial and error my colleagues and I came up with an appropriate solution. As a result, it makes our application look completely different and easier to interpret.

We were thrilled how efficiently our method worked. The functionality we created can be reused involving projects with similar requirements. So not only were we able to save ourselves time but we have implemented this technique around the office to help maximize our employees’ workflow.

What is the best feedback you ever received?

I worked on a project for which I was responsible for the front-end development of the application. For this design I received appreciation from my manager stating that the UI of the application is very well developed along with the data transfer mechanism. He continued to say how hard work and persistence are the driving factors for success. This has stuck with me as I continue to strive for improvements in my work and daily life.

What do you like to do with your free time outside of work?

I like to spend my time acting and dancing at the AfterWork Theater in New York City. We recently finished preforming a rendition of Guys and Dolls which is a musical comedy about gamblers in the big city! I have a love for theater and I am happy knowing I am able to pursue both my dreams working as a software developer while participating in the world of performing arts.

"I'm a big fan of KMK."
"KMK has the majority of our field analytics work, including alignments, call planning, field targeting processes, field reporting, and incentives. I couldn’t be more pleased with the work from KMK."
"In every area they have delivered high-quality work and in many cases exceeded our expectations."
"[KMK consultants] take the time to understand our problems and work with us to come up with a solution, versus larger analytic shops who come with pre-defined solutions. I would recommend them to anyone who asks."
"KMK has done a great job on the market research and analytics we needed to support the launch of our first product."
"We turned the bulk of our research assignments over to them, beginning with the new product forecast, and have benefited from a very effective partnership with senior staff who understand our business and care about our success."